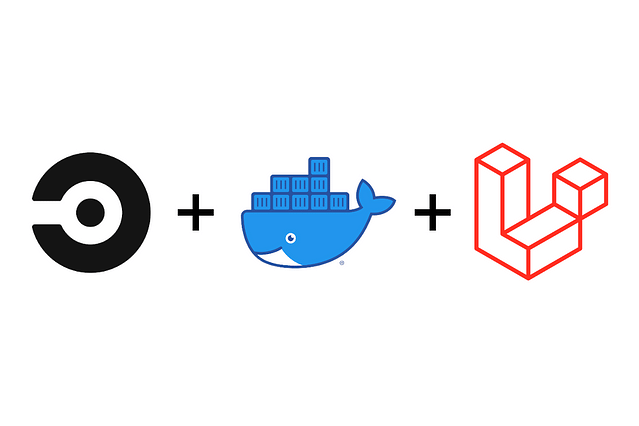 Creating an efficient CI pipeline with CircleCI, Docker, and Laravel

Efficient and fast CI pipelines are great because you quickly know if your application behaves the way it does, by running automated tests. Having pipelines that take a long time to complete have the disadvantage that people might start to ignore the status checks if something needs to be fixed quickly. This is something you want to avoid, so I've compiled a way to run PHPUnit tests in a very simple environment without having to install any composer dependencies.

Setting up a docker compose environment for CI

When your application is dependent on a lot of different services, you want to mock most of these or run them in RAM memory. For database tests for example, you often want to use an in-memory SQLite database. However, in my case this was impossible as the application was dependent on certain geolocation functions (ST_AsText, ST_MPolyFromText, ST_IsValid, etc.). These are not available for SQLite, so instead a MySQL server with a mounted tmpfs volume storage device will have to do. This simply means that we're using a MySQL server, which is tricked into using RAM memory as a storage device. This results into lightning fast reading and writing operations. You get the functionality of a MySQL server with the performance of a in-memory SQLite database.

The special things in this configuration are the tmpfs key and the networks. The tmpfs key tells the docker container to place the /var/lib/mysql folder into RAM memory. This is the folder than contains all the data that's stored in the databases. The networks key is important, because we'll come back to that in a minute. For now, you just have to create a new network and make sure the mysql container is part of that network. This network has the name "front". This is important for later.

Creating a docker image for your PHP environment

Since it's not really possible to cache installed programs and extensions in CircleCI (installed through apt-get install), the only other way is to create an docker image that contains all required programs and extensions. When you build this docker image, the layers will be cached and you'll be able to run the docker image in mere seconds, even though it includes all software you need to build your application. If you install these applications on the virtual machine within CircleCI, this could take up to 5 minutes and that's just preparing the testing environment. Using a provisioned docker image, you can download it in 10 seconds and run commands 3 seconds later.

Since I'm testing a Laravel application, I can use the following Dockerfile to install any and all composer dependencies and run any and all artisan commands:

As you can see here, I'm using the Debian slim image instead of Ubuntu 18.04 (or any other version). This is done with the sole reason that the Debian image is 50 - 60% smaller in size, which means it'll download much faster. Instead of downloading 900mb, CircleCI will "only" have to download 300mb. This Dockerfile installs all PHP dependencies I need and the latest installation of Composer.

This Dockerfile is also available for download, you can pull it by running:

Let's go through this command line by line:

docker run --rm: This will run a command and remove itself after the command has finished.

-v `pwd`:`pwd` -w `pwd`: These are backticks, not quotation marks! This will mount the current directory in the same location in the docker container and set the working directory to that folder. This means that all commands will be run in that folder.

roelofjanelsinga/test-suite: This is where you specify the container to run. I'm simply using the container we've created earlier. CircleCI won't have this container installed locally and will download it. This is why I'm using Debian slim instead of Ubuntu, just to make this process run more quickly.

composer install: This is the command we're running. This will install all composer dependencies using the software we've install inside the docker container. Since we mounted the current directory into the docker container and we're running the command in that directory, this will write all composer files to the storage layer in the virtual machine.

Installing composer dependencies takes a while depending on how many dependencies you have installed. To avoid doing this every time, we will cache these dependencies:

Now that we've discussed everything that's related to using Docker to improve your CI pipeline performance, I'll show you the full configuration and how you could use it in your own projects:

As you can see, all commands to interact with the applications are run through the docker container. We're installing composer dependencies, generating a application key, and running PHPUnit tests in the docker image. This makes it so the virtual machine (ubuntu) doesn't need to install anything, because docker is already preinstalled. They only thing the virtual machine does is pulling the latest changes from a git repository. Everything else is managed through the docker container.

I hope this helps you improve the efficiency of your CI pipelines. If you have any questions or suggestions to make this configuration better, please let me know on Twitter.